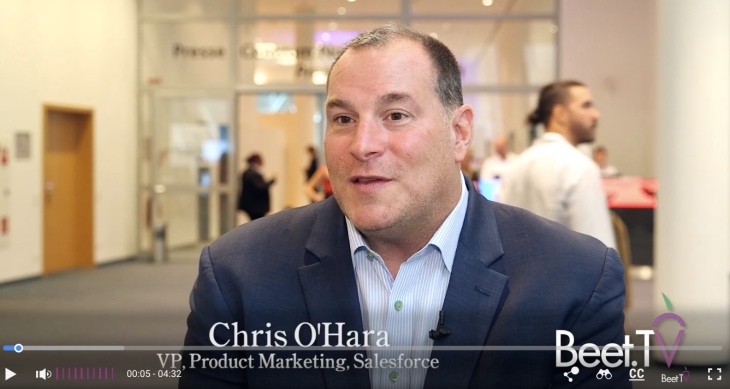 COLOGNE – At Salesforce, the acquisitions keep on coming, most recently that of AI-powered marketing intelligence and analytics platform Datorama. The company’s ongoing mantra is “integration” and it seems to have no shortage of assets to leverage in that quest.

It all stems from what Chris O’Hara, VP, Product Marketing, calls the “fourth industrial revolution” led by things like data, AI and the internet of things.

“It’s harder for marketers to deliver personalization at scale to consumers and that’s the goal. So everything we’re doing at Salesforce is really about integration,” O’Hara says in this interview with Beet.TV at the recent DMEXCO conference.

By way of examples, he cites the acquisition of ExactTarget about four years ago with the intention of making email “a very sustainable part of marketing, such that it’s not just batch and blast email marketing but it’s also your single source of segmentation for the known consumer.” The end result was the ExactTarget Marketing Cloud Salesforce Integration.

In late 2016, Salesforce bought a company called Krux and within six months had morphed it into Salesforce DMP. It was a way to assist marketers in making sense of households “comprised of hundreds of cookies and dozens of different devices” and aggregate them to a single person or households “so can get to the person who makes the decision about who buys a car or what family vacation to take,” O’Hara says.

Salesforce DMP benefits from machine-learned segmentation, now known as Einstein Segmentation, to make sense out of the thousands of attributes that can be associated with any given individual and determine what makes them valuable. Developing segments by machine replaces “you as a marketer using your gut instinct to try to figure out who’s the perfect car buyer. Einstein can actually tell you that.”

In March of 2018, MuleSoft, one of the world’s leading platforms for building application networks, joined the Salesforce stable to power the new Salesforce Integration Cloud. It enables companies with “tons of legacy data sitting in all kinds of databases” to develop a suite of API’s to let developers look into that data and “make it useful and aggregate it and unify it so it can become a really cool, consumer-facing application, as an example.”

Datorama now represents what O’Hara describes as a “single source of truth for marketing data, a set of API’s that look into campaign performance and tie them together with real marketing KPI’s and use artificial intelligence to suggest optimization.”

In addition to driving continual integration, Salesforce sees itself as “democratizing” artificial intelligence, according to O’Hara. “There’s just too much data for humans to be able to make sense of on their own. You don’t have to be a data statistician to be able to use a platform like ours to get better at marketing.”

This interview is part of a series titled Advertising Reimagined: The View from DMEXCO 2018, presented by Criteo. Please find more videos from the series here.

BY STEVE ELLWANGER ON SEPTEMBER 18, 2018 @STEVEELLWANGER